Mew talking to me? How small wild cats communicate

How cats communicate with humans is a much-discussed topic of conversation. There are many different theories surrounding domestic cats looking at how and why they try to communicate with us. Some theories even suggest that a cat’s meow has been developed over thousands of years of domestication to mimic that of a human baby to achieve the best possible chance of getting our attention and more importantly our sympathy thus increasing their chance of getting fed.

Today’s post is going to look at how small wild cats not only communicate with each other but also with other animals they encounter, some of which are so ingeniously cunning it would surprise you if you didn’t already know how cunning small wild cats can be.

To start, we should look at the differences between the big cat vocalizations and smaller wild cats.

Whilst you may think that a difference between the so-called ‘big cats’ and the ‘smaller cats’ is the ability to roar. This isn’t the case, and whilst there are forty cats (at time of writing, depending on who you ask) with 7 of these are considered to be ‘big cats’, only four can Roar. Tigers, Lions, Jaguars and Leopards. 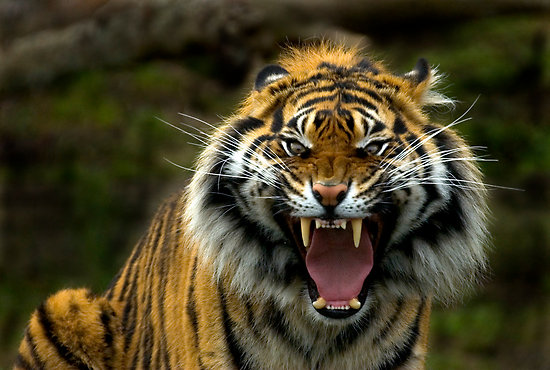 The reason for this is to do with a flexible neck bone called the hyoid enabling them to stretch the larynx and allowing them to roar. All other cats have a hyoid bone that is hardened, this stops them from being able to roar but instead allows them to make the purring noise we all know and love.

The one exception to this rule is the snow leopard (Panthera uncia). This large cat has the flexible hyoid bone, but cannot roar or purr. Instead, he makes a rather likeable noise known as ‘chuffing’.

Given that almost all wild cat species are solitary the need to communicate with one another might not easily be done on a face to face basis. To mitigate this problem cats do something called scent marking. Scent marking allows cats who may never meet face to face to communicate vital messages to each other.

Scent marking involves spraying urine and defecating on landmarks. This urine contains vital messages that can be passed on to other cats. Besides marking each cat’s own territory these scents can carry other vital information such as age, sex, and most importantly mating availability.

Psychical encounters between wild cats are typically avoided unless absolutely necessary. When cats do come into contact body language is normally used to diffuse the situation. A submissive stance by one of that cats can normally deter any psychical contact leading to a fight. Cats will try their utmost to avoid a fight due to the fact that in the wild cats rely on their agility and one small injury can often be fatal. On some occasions when neither cat backs down, they can be found to make a rather disturbing wailing noise as can be heard by this rare lynx (Lynx canadensis) encounter caught on camera.

Cats also use their ears to communicate. Something you may have noticed is that cats often have markings or tufts upon their ears making them easier to distinguish. Tigers often have clear white spots on their ears to aid with this silent form of communication. As well as tigers we can see these white markings on other small cats such as margays (Leopardus wiedii), servals (Leptailurus serval) and Bobcats (Lynx rufus) 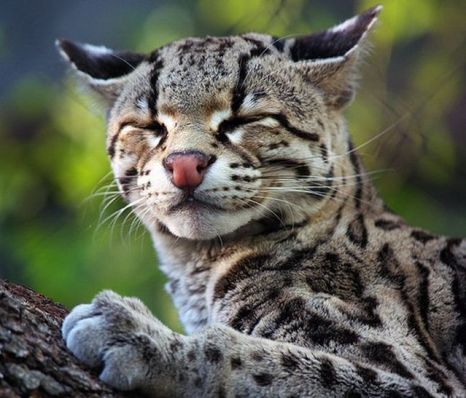 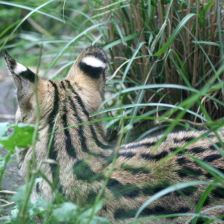 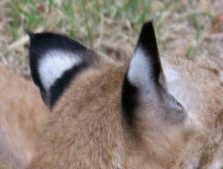 Often the position of a cat’s ears will tell you about their mood. If a cat has his ears facing forward it often means they are about to attack, the cat is essentially honing his senses in on where he plans to attack. If his ears are back it can mean the opposite in that he doesn’t want to get hurt and is moving his ears out of harm’s way.

Cats from the Lynx lineage have tufts on their ears and whilst we don’t know for certain this is for communication it is one theory that is offered. Tufts aren’t just occurring in Lynx species, we also see them on other cats such as the caracal (Caracal caracal) with its rather accentuated ear tufts. This caracal below certainly seems to be trying to tell us something…

Other non-verbal forms of communication can be found in watching a cats tail. For a domestic cat having your tail in the air can be a sign of happiness or being at ease. In the wild, it seems cats use there tails less for communicating but for balance and for warmth. Cats in the wild will often hold their tails vertically rather than horizontally whilst they walk or in between their legs.

Blinking is another form of communication used by cats, a long, slow blink or wink is often a sign of trust between cats and is something you can try with your cat at home.

Whilst vocalisation between cats is pretty rare and meowing even more so there are a range of other noises that they make. These can have a variety of meanings. A kitten or cub alerting its mother of its whereabouts with a squeak for example. Other noises have been described as yips, grunts, yowls, coughs, chirps and of course purring.

The one vocalisation that seems universal is the hiss. The reason cats hiss is unknown but some theorists suggest it is to mimic the sound of a snake, a creature feared by many in the animal kingdom due to its venomous bite.

Finally, mimicry isn’t something you would normally associate with cats. Birds, maybe but cats aren’t that clever are they? In 2005 a study into margay (Leopardus wiedii) hunting behaviour found exactly that. While making field observations at the Reserva Florestal Adolpho Ducke in Brazil, the researchers spotted a group of eight pied tamarin monkeys (Saguinus bicolor) feeding. Rather than rush the tamarins the margay instead mimicked the cry of a baby tamarin trying to entice the adult tamarins in for a closer look. Unfortunately for the margay this time he was unsuccessful but once again its a show of just how cunning these small wild cats can be.

Just as a side note. Please feel free to use the lynx video as a way of removing your cat from your laptop. Its the first time I have written an article and my cat hasn’t tried to add his own form of commentary. 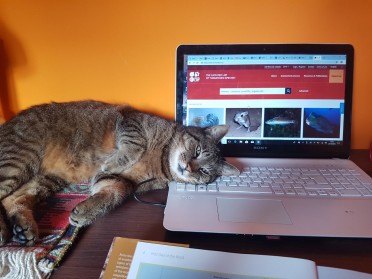 DISCLAIMER: WHILST WE ALWAYS TRY AND CREDIT THE PHOTOGRAPHER FOR ANY PHOTOS USED OFTEN THAT INFORMATION MAY NOT BE AVAILABLE. IF YOU SEE A PHOTO THAT IS YOUR OR SOMEONE YOU KNOW AND THEY WISH FOR IT TO BE CREDITED OR REMOVED PLEASE GET IN TOUCH AND WE WILL ACT. PLEASE BE AWARE THAT NO PROFIT WILL HAVE BEEN EARNED FROM YOUR IMAGINE AND ITS USE SIMPLY TO RAISE AWARENESS OF SMALL WILD CATS.

IMPORTANT MESSAGE: ‘I WANT ONE’ – PLEASE REFRAIN FROM POSTING THIS MESSAGE AT ANY POINT ON HERE OR OUR SOCIAL MEDIA OUTLETS. WE KNOW YOU ARE PROBABLY JOKING BUT WHILST THE PICTURES WE USE ARE VERY OFTEN CUTE AND SOMETIMES APPEAR CUDDLY THESE CATS ARE WILD! ALL CATS HAVE THE RIGHT TO BE WILD AND ITS OUR RESPONSIBILITY TO ENSURE THEY KEEP THAT RIGHT. IF YOU WANT A CAT WE SUGGEST GOING TO YOUR LOCAL RESCUE CENTRE AND SAVING A CAT AND LET WILD CATS STAY THAT WAY!

← Cataptability – did cats ability to adapt save it from extinction?
Rusty Spotted Cats →