Missing cats – Why there are no Wild cats in Australia.

A question we are often asked at FELIS is, “Why are there no wild cats in Australia?”.  It’s an interesting question and we will attempt to explain the reasons for this and try to demonstrate how we know.

Oi! Stop yawning – this is interesting…

To begin to explain the lack of  wild cat species in Australia we have to go way back in time. In fact, we have to go all the way back to around 200 million years ago, long before the origin of cats.

Through the fossil record we now know that the first fossilised cat remains (Proailurus lemanensis) are approximately 35 million years old, and it seems that cats began  evolving rapidly during the Oligocene period, 33-23 million years ago, which relatively speaking is quite late in the earth’s geological history. From this we have our wonderful cat family Felidae.

Long before the first fossilized records of cats, in fact around 100 million years before, Australia, and its surrounding islands New Guinea and New Zealand had separated from the super continent of Gondwanaland and starting drifting east. 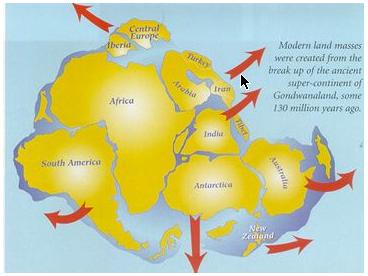 So Australia was cut adrift from the main continental mass a hundred million years before the first species of cats came along. It’s believed that since there has never been a land bridge (even during times of low sea levels) to Australia since the time of separation, wild cats, along with many other species including primates, were never able to colonize either Australia or New Zealand or New Guinea.

Amazingly, Africa at this time was also a separate continent without cats. From geological records we know that both Madagascar and the Indian Subcontinent were once connected to the east coast of Africa. Then, around 180 million years ago Madagascar and India separated from Africa and started moving Northwards before eventually reaching and crashing into the southern Coast of the Asian continent.

Fast forward a cool hundred million years and we now start to see the migration of cat species from Europe, which was then a vast subtropical forested landscape, into Asia. India, part of Asia, now started to become populated by these Asian wild cats.

The wild cats of Asia didn’t stop there however, populating the islands of Asia such as Bali, Borneo and Sumatra during times of low sea levels. Interestingly we know that there were once Tigers on Bali but its neighboring island of Lombok (separated by less than 100km) has no Tigers, in fact Lombok had no trace of cats at all.

It was this interesting fact, along with the differences in other flora and fauna between Bali and Lombok that lead the naturalist Alfred William Wallace to investigate. It is from his work that we now know that the islands of Bali, Java, Sumatra and other islands to the west were attached to Asia, and hence do have wild cats species, whilst Lombok and other Islands to the east were once attached to the Australian continent and therefore have no records of wild cat species.

It was this discovery that lead to an imaginary line separating the cat-rich islands of Bali et al to the West and the cat-free islands of Lombok to the East being called The Wallace line. 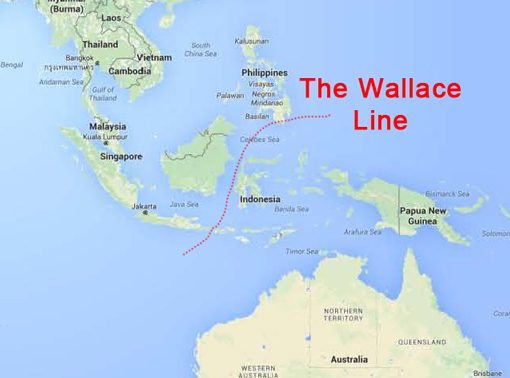 Of course, now the domestication of cats means that cats have conquered the World and can be found in all corners of the globe. Lets face it, it was only a matter of time..

One Comment on “Missing cats – Why there are no Wild cats in Australia.”